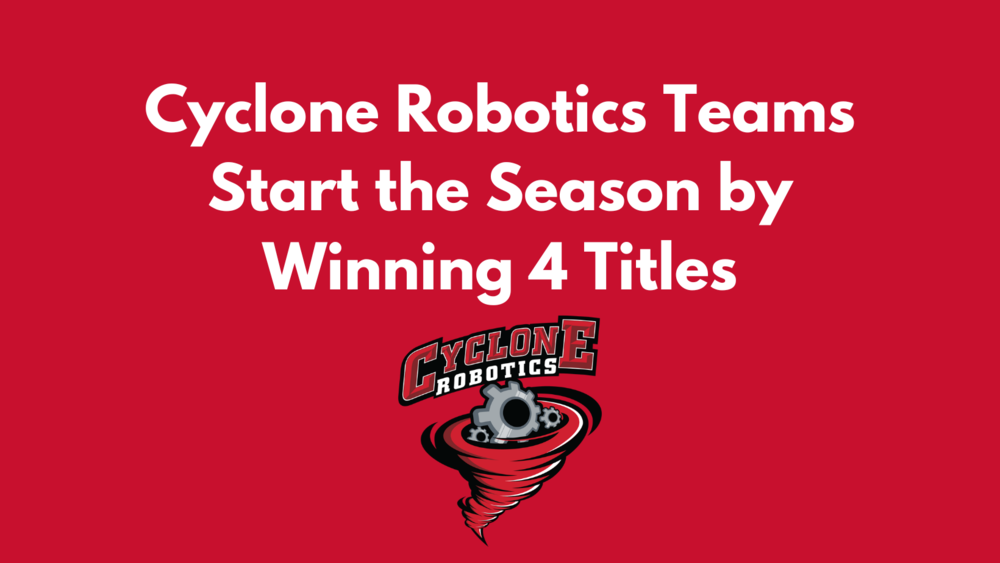 The 2022- 2023 season began at the Cabot Classics Robotics Tournament on October 15th. Team 967C, in an alliance with a Cabot team, bested all other teams in a single elimination tournament. The Tournament Champion award was earned by 967C for winning the event.

Team 967D won the Excellence award for their high performance in multiple categories. The Excellence Award is the top award at a VEX robotics tournament. Only one team earns this award and they earn it by exemplifying overall excellence in building a high-quality robot, implementing the engineering design process, performing well at the event, and impressing judges.

The winning streak didn’t stop there! The Cyclone Robotics teams returned victorious once again from the Bulldog Battle Robotics tournament on Saturday, November 5th. Two teams earned awards, one for Tournament Champion and the other for design.

Team 967K, in an alliance with a McGehee team, beat all other teams in a single elimination tournament to become Tournament Champions. This achievement qualifies them for the Arkansas State Robotics tournament hosted by ATU.

The Design Award was presented to team 967E for demonstrating an organized and professional approach to the design process, project and time management, and team organization. The team’s Engineering Notebook and Judge's interview shows a high ability to produce a quality robot with minimal adult assistance.

Out of the 24 teams at the tournament, three Russellville teams made it to the quarterfinals and the finals match was a showdown involving two of those teams.

RHS robotics teams will be competing tomorrow, November 12th, in the RHS Cafeteria. Finals matches will be held from 2:30 pm to 4:00 pm for anyone interested in seeing our Cyclones competition.

Cyclone Robotics is off to a great start this season and hopes to continue this success at future events.